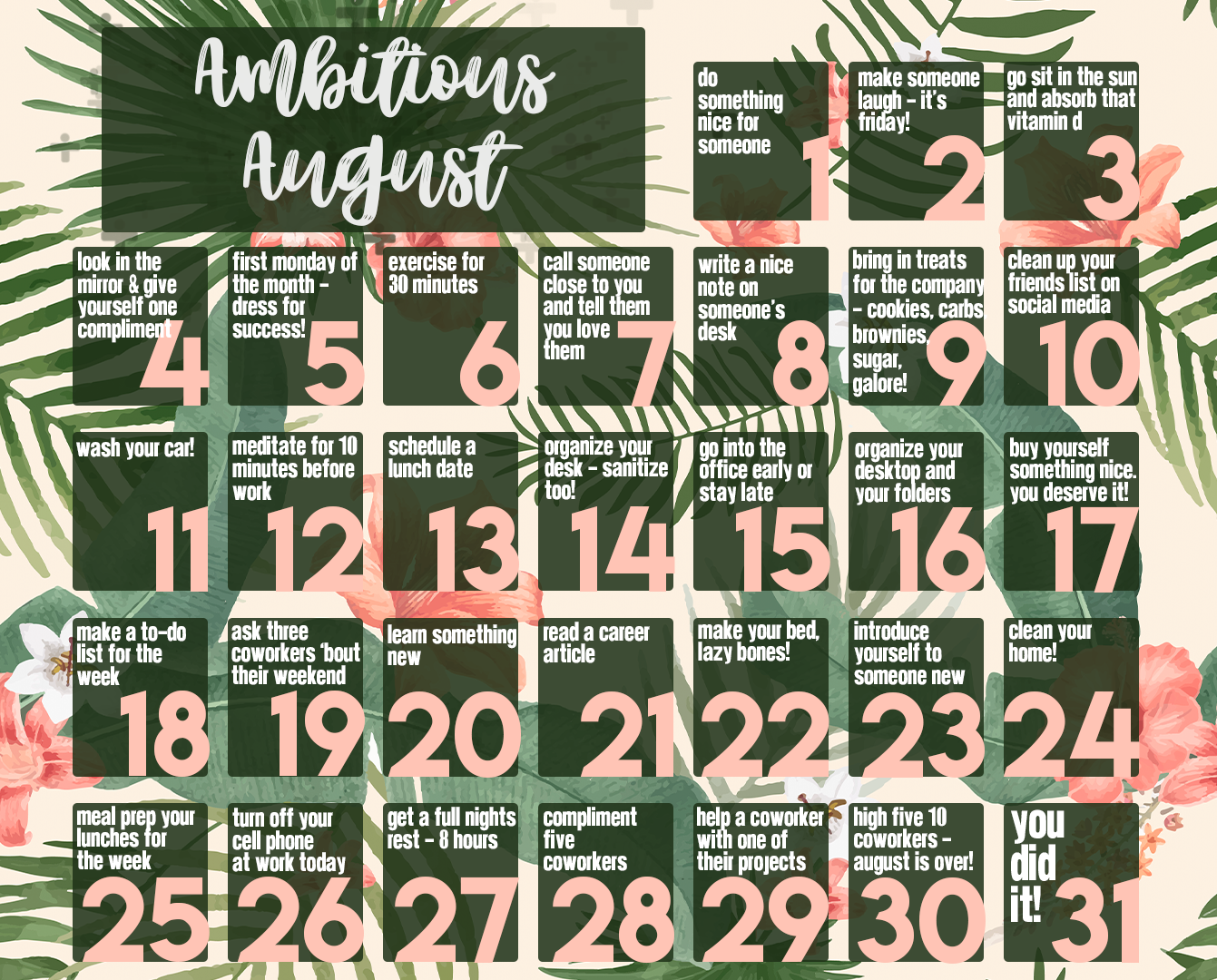 August 1st – “Do something nice for someone.” Not only will it make them feel good, but it will make feel good too!

August 2nd – “Make someone laugh – it’s Friday!” A big stress reliever is laughing and a study shows that people will like you more if you make them laugh.

August 3rd – “Go sit in the sun and absorb some Vitamin D.” Vitamin D promotes bone growth, reduces depression, promotes weight loss, and fights diseases! Why wouldn’t you want to be lounging around in the sun with all those health benefits? But, don’t forget to wear sunscreen!

August 5th – “It’s the first Monday of the month! Dress for success.” Dressing professionally demands respect and it also builds your self-confidence. It’s also fun to know you look great!

August 6th – “Excercise for 30 minutes.” This can be going for a walk during your lunch, going to yoga, and everything in between! Get up and be active – there are so many health benefits to working out.

August 7th – “Call someone close to you – someone you love. Express your gratitude towards them, tell them you love them or thank them for being there for you.”

August 8th – “Write a nice note on someone’s desk.” This brightens up people’s day and freshens up the office environment.

August 9th – “Bring in some treats for the company.” Get your ‘Martha Stewart’ on and bake some cookies, brownies, or cupcakes! Or bring in some yummy carbs and goodies for everyone to chow down on.

August 10th – “Clean up your friends’ list on social media” Still friends with those annoying, popular girls from high school? Just unfollow them – you’ll feel less anxiety logging on without seeing all their posts about “joining their pyramid scheme”.

August 11th – “Wash your car.” There’s nothing better than a squeaky clean ride! Just cross one more thing off of your list.

August 12th – “Meditate ten minutes before coming into work” Get your mind focused and relax before the worries of work sink in.

August 14th – “Organize your desk – sanitize too!” You should be organizing and ridding your desk of germs, at least, once a month. Not only does this help you avoid illnesses, but it also reduces stress by not having to deal with a messy desk. Messy desks make for messy minds!

August 15th – “Go into the office early or stay late.” Think of all the work you can get done by spending a little more time in the office.

August 16th – “Organize your folders on your desktop.” Get rid of folders or documents you don’t need anymore to clear space up on your computer.

August 17th – “Buy yourself something nice – you deserve it!” Everyone deserves a little splurging every now and then.

August 18th – “Make a to-do list for the week.” Reach out to this partner on Monday, clean your bathroom on Tuesday, finish that project by Wednesday… Write down everything you want to get done within the week – personal and professional.

August 22nd – “Make your bed, you lazy bones!”  Navy Seal William H. McCraven, commander of the forces that led the raid to kill Osama bin Laden, told the 2014 University of Texas graduates, “If you want to change the world, start off by making your bed. If you make your bed every morning, you will have accomplished the first task of the day. It will give you a small sense of pride, and it will encourage you to do another task, and another, and another. And by the end of the day that one task completed will have turned into many tasks completed.”

August 23rd – “Introduce yourself to someone new.” The more friends the merrier!

August 25th – “Meal prep your lunches for the week.” Start your week off right with healthy lunches!

August 26th – “Turn off your cell phone today.” Don’t let the hundreds of notifications distract you from your work.

August 27th – “Get a full nights rest.” A whole eight hours of sleep? Unheard of! Well, not tonight…

August 28th – “Compliment five coworkers.” Compliments are nice to receive but even better to give. Tell someone how much you love their hair or their outfit! You could turn around someone’s awful day to somewhat bearable.

August 29th – “Help a coworker with one of their projects or responsibilities.” Help out some of your coworkers that are stressing over certain projects, they’ll appreciate it.

August 30th – “High-five 10 coworkers.” August is over, time to celebrate the coming of a brand new month.

August 31st – “End the month doing three of your favorite things you did this past month from the list above.” You’re ending the month & starting the new month as productive as ever!

This info graphic explains some great ways you can ensure you are remaining engaged at work. With 2/3 of the American working population disengaged we couldn’t help but share some tips!

Asking questions during an interview allows the interviewer to know you are interested in the position and you are serious about the company. You also want to make sure you’re getting every single piece of information about the position and the company before you accept the job. so, which questions should you be asking to give you a good feeling about what this opportunity is all about? 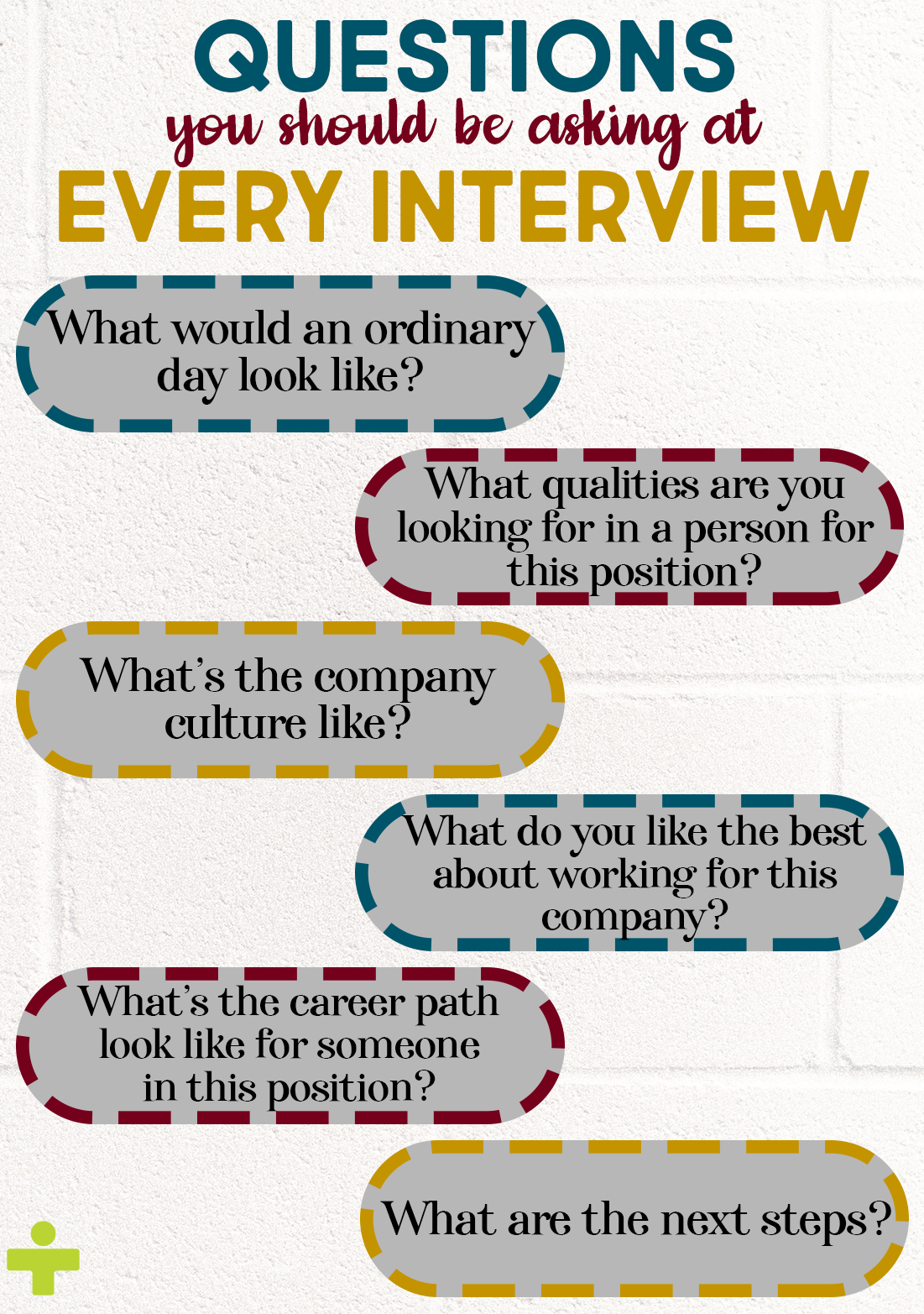 I sent an email earlier today, but didn’t receive a response yet. How long do I have to wait, to send a follow up email?

I am no longer employed with you, do I still have access to Paycor?

Yes, you still have access. As long as you registered within 1 year of your end date, you will have access to view and print any documents (including your W-2, when available).

When will W-2s be available?

W2s will be mailed out by January 31st.

How can I get an electronic copy of my W-2?

By January 31st, W-2s will be available online by going to www.paycor.com. If you are not registered with Paycor, you can do so by clicking the ‘Register Here’ link at the bottom of the sign in box. The access code is 82236 and follow the prompts.

Send us an email. Include your full name (at the time of hire), date of birth, and last 4 of your Social Security number and the support team will be able to assist you further.

I don’t remember my username and/or password to Paycor, what do I do now?

Send us an email along with your full name (at the time of hire), date of birth, and last 4 of your Social Security number and the support team will be able to assist you further.

I need to change the address on my W-2, how do I do that?

Send us an email along with your full name (at the time of hire), date of birth, and last 4 of your Social Security number and the support team will be able to assist you further.

I contacted Paycor and they will not help me with my questions/issues, who do I contact?

Send us an email. Include your full name (at the time of hire), date of birth, and last 4 of your Social Security number.